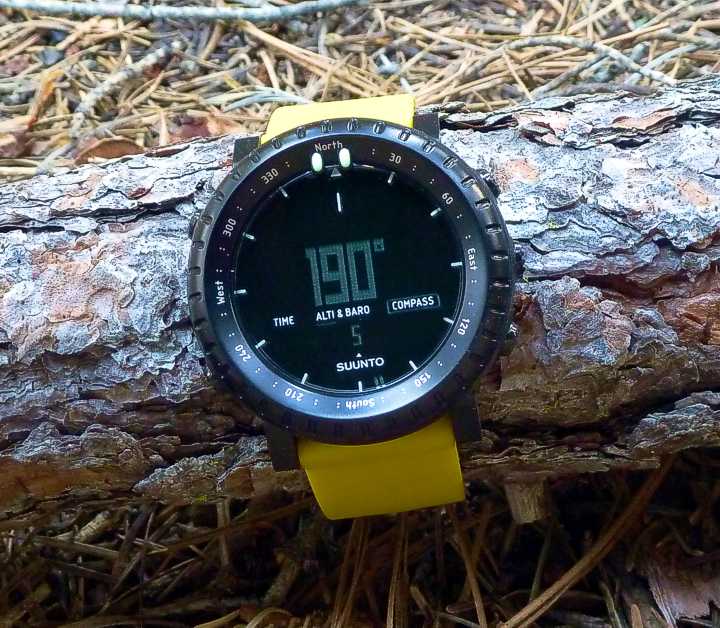 Finnish compass and watch manufacturer Suunto originally introduced the Core in 2008 in part to bring a more fashion-forward stance to their primarily utilitarian product line. Products like the Vector had been the standard-bearer for the brand up until that point, but it was too bulky for many. The Core brought the same accuracy and ruggedness associated with the Vector, but with Euro sleekness and interface improvements. In April, Suunto unveiled a new set of Core products dubbed Crush that push and pull the styling elements into just the right range – balancing the sleek with the rugged – all the while delivering one of the most usable interfaces in the category.

Like all the watches in this test, the Suunto Core Crush features the requisite altimeter, barometer and compass capabilities. Both the barometer and altimeter were straightforward to calibrate and readings were accurate. The compass, however, was a touch problematic.

The pamphlet which ships with the watch describes only one calibration cycle for the compass and the Settings menu has no discrete option for additional calibrations like other watches. When our initial calibration didn’t yield accurate readings, we were stymied. It took us multiple reviews of both the pamphlet and downloadable manual to determine that placing the watch in Compass mode and repeating the calibration steps would solve the problem. Suunto, please make this more prominent in the documentation instead of a Note/Tip in small italic type. Once complete, we were able to use the declination adjustment to fine tune and deliver very accurate readings.

Suunto packs the Core Crush with a range of other very useful features. There’s dual time zones, sunrise/sunset times for 400 locations, alarms and a countdown timer. This latter feature is one that’s lacking in many ABC watches and I don’t know why. I use it for cooking and much more, and it works perfectly on the Core Crush.

The altimeter and barometer interface can be set to prefer either function or to automatically switch between the two depending on whether you are moving or stationary. The display can be customized to show a range of metrics on a single screen. A similar set of customizations are possible on the other two main screens (Time and Compass) as well.

We found the user interface on the Core Crush to be excellent, one of the best on the market. Having said that, there are two areas that can be improved. First, we’d like to see the secondary functions like chronograph be displayable in large numerals instead of relegated to small type under the Function menu. Second, the Core Crush uses a negative (white on black) display which can be difficult to see in certain lighting conditions. We’d like a brightness adjustment on the Core Crush. With these additions, an already great watch will get even better.

As mentioned earlier, the new Core Crush models get the styling just right, balancing the sleek and the rugged. I found the original Cores with their finely knurled stainless dials just a little too, well, “pretty.” The Core Crush uses a deep lugged dial which is handsomely rugged. The labeling is also much more clear and detailed, and includes a large notch for setting North to aid in navigation.

One of the standout features of the Suunto Core Crush is the new silicone rubber strap. It’s extremely comfortable. And when you combine that with one of the lightest weights in the category – just 2.375 ounces – this ABC watch felt like wearing nothing on my wrist. Adjustment was easy too. There were plenty of notches in the band to get a custom fit.

The Suunto Core Crush is simply one of the best ABC watches on the market. It has all the right features, a powerful user interface, accuracy, ruggedness and great styling. Recommended.

Thanks for reading another outdoor gear review from GearGuide. And thanks to Suunto and Outside Media for providing product for this review. Written by Matt K.

Where to Buy Suunto Core